Avery, as a 12-year old girl does not own many button-up tops. Button-up tops, however, are the only kind she can get on.  Those, and spaghetti -strap tank tops that she can step in to and pull up. She is still finding herself warm most often, so the tank tops work in the house, and I bought her a new button-up to go with one she got at Christmas for when we need to go out. She is gaining strength and flexibility every day, so think she will be back in sweaters shortly, but if not, we may need a new wardrobe to account for her added height anyway.

I don't recall if we mentioned how her hips,  knees and ankles were all cut up from  the rigors of surgery, so she is also finding that only a few of her underpants are comfortable as most of them the band runs right across her scabby hip bone.

Today we left her home for a few hours with one of her friends - she doesn't need constant care  but I also am not ready to leave her home alone. On day one she could not put the feet up on the La-Z-Boy, but now she can - but she also can still get stuck leaning too far back and cannot pull herself up enough to get out of the chair, so someone to rescue her is a good idea.

I told her my signal to start talking about school again is when I see her reading, so she tried today, but couldn't keep her focus to make it through a chapter. She is still on the good drugs, so I give it another week before she starts thinking properly again. She is also curious how she will handle sitting in her desks, as she can currently only handle being up at the table for about 15 minutes before she needs to recline or full on lie down.

She is still using the jerry-rigged safety rail to get in and out of bed - I knew we were keeping that old sewing chair for a reason! But she pretty much skips down the stairs, so that came back like nothing. 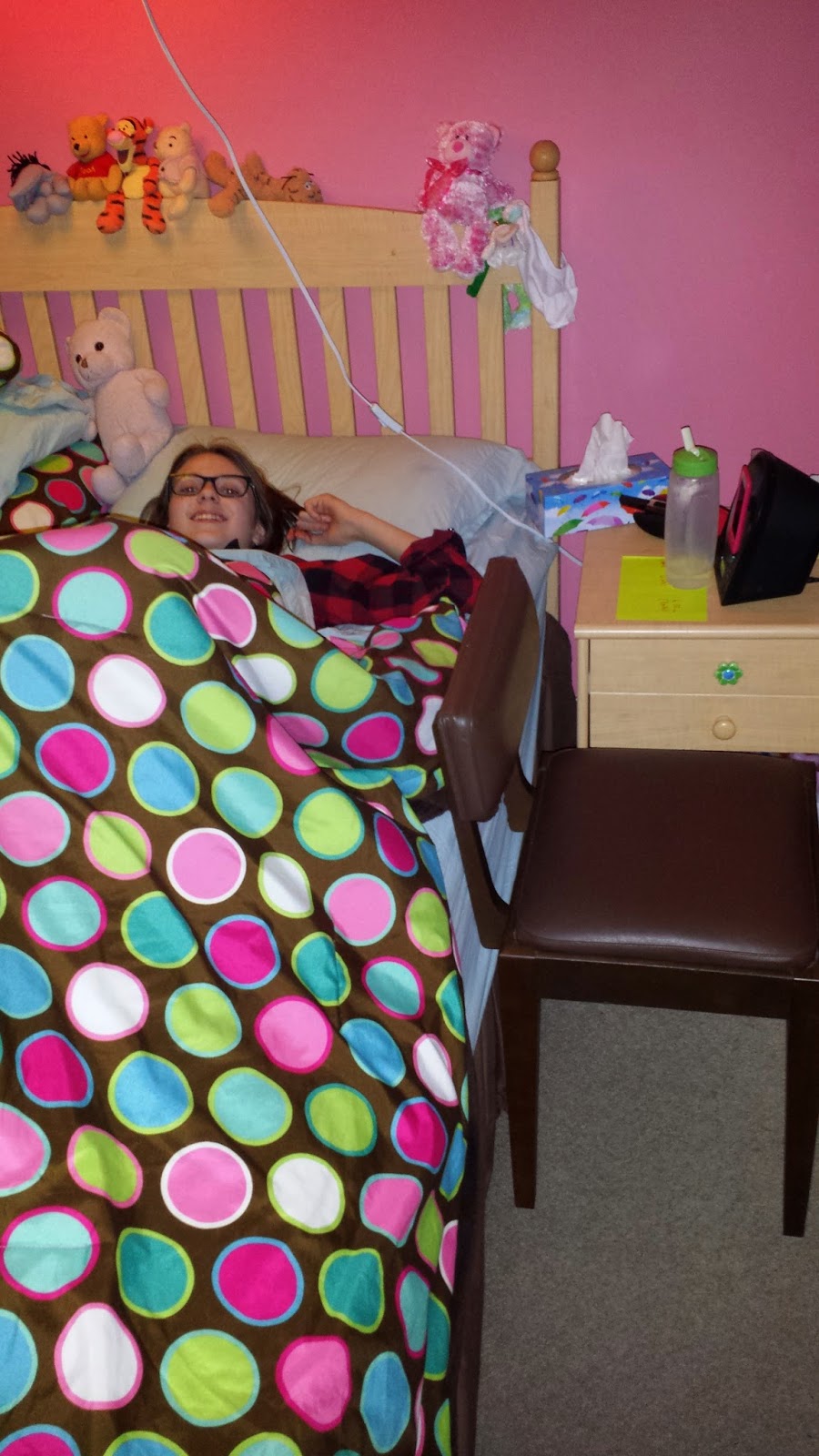 Yesterday I was out  a quest for a bath bench, which I found, but then had a laugh in the evening after Andrew went to install it - I seriously forgot the kids have a 1 piece bath/shower thing, so there is no lip on the wall side for the bench to rest on - Andrew made it work though  and Avery enjoyed her first shower in 10 days. She has had to lose her modesty, as there have been a number of things she never would have done in my presence before surgery that have happened post - surgery.  Yesterday she called me (on the walkie - talkies - it is so convenient to have these as we are past baby monitors in this house) to come help her dry off after the shower as she still can't balance and bend with any ease. But she was able to get her arms up high enough to brush her hair, so still progress .

Otherwise, as long as we have pain meds, a pillow and some water she can handle most anything we have thrown at her. She eats dinner at the table with us, but gets exhausted by the effort to cut up her food. Her first food requests were all finger foods, I thought for ease of eating, but she later told me that our utensils weigh too much - things I have never considered before.

Before her appointment in Hamilton yesterday she asked if we could go out somewhere. By mid - appointment she had fully changed her mind. I am hoping she will be up for a visit to school this week - her classmates have been amazing and I think it will do her soul good to see a few more of them in person.

That's all. Just a few random things in case anyone is reading this as a guidance document for their own kid.