Day 2 in the books and we take some questions

Jodi has made her way home after a short visit from The Dude and grandpa. Pants wasn't too alert but did manage a couple smiles. Dr. Missiuna came by when I was down at dinner and said that she was still ahead of where they expected her to be. That's good news but she's still in a lot of discomfort and just wants to go home.
She's due for vitals check and more pain meds at 8. The nurses will be by at 12, 4, and 8 and Jodi will be back sometime before 10am. Hopefully we can get her up tomorrow as she only spent about an hour sitting upright today.
The night nurse just came in and discovered that her left arm was experiencing infiltration. That's where the IV leaks into the arm instead of the vein. It was all swollen and tight. Also, not all her meds from the pump were getting into her system. The nurse switched the lines to her right arm and took out the IV from the left arm completely and Pants's mood improved immediately. Hopefully at some point tonight they'll take out her main line - the one that goes into her neck. Fewer tubes is good news.
Now for some questions from the press gallery:
- Will they ever remove the hardware in her spine?
- Will she still grow? If so, do they adjust the hardware?
The short answers are "no", "yes", "no".
It's much too risky to have to open her up again and unscrew the rods. It's a terribly invasive surgery that involves the spinal column so once they're done with the installation they leave it there forever. There are cases where they have been removed but this is very rare. As for growth, she is growing in two places: her legs (femurs) and her spine. Fortunately, due to her age and physical development she does not have too much spinal growth remaining (the second opinion doc at Sick Kids estimated a couple centimetres).
The area that's fused is 14 vertebrae and there will not be any further growth in that area. As such, the hardware will stay the way it is and her vertebrae will fuse together and that's the spine she'll have for the rest of her days. I gotta tell you though, from what I've seen to this point it's mighty fine looking. Such an improvement over the crooked, asymmetrical one she had before! Now, it's possible she may realize some growth from the remaining vertebrae but it will not be significant. She will still grow in her legs though so she's not done getting taller quite yet.
If anyone has any other questions just leave a comment or send us a message on Facebook or via email (potatochipmath at gmail dot com).
~ Dad
Posted by Andrew Butters No comments:
Email ThisBlogThis!Share to TwitterShare to FacebookShare to Pinterest

Tales From The Ward

So Jodi sent me home yesterday afternoon. I got home about 30 seconds before grandpa came home with The Dude and he was thrilled to see me. Unfortunately I was beyond exhausted and only got to spend a few minutes with him before crashing. I managed to get up and go with him to bowling practice, so that was nice.
After a pretty good sleep I checked in with Jodi to see how our super star princess was doing. She slept but nurses come in every couple hours to poke and prod so her sleep is fragmented. Jodi didn't sleep much as there's alarms that go off constantly and just a lot of activity on the floor in general. I'm back at the hospital now and Dude is coming to visit with grandpa after school. Jodi will go back with him and I'll be staying here.
They stopped her background pain meds (a constant stream to supplement the morphine pump) so it's just the pump now. I don't see her hammering the pump button all the time; it's usually lit for a while before she hits it, so that's good.
She just rolled over onto her side, mostly on her own. I can tell she's not super comfortable but she's calm and relaxing reasonably well so that's good. Just waiting for another visit from the physiotherapist and the nurse (on her regular rotation).
Not a very exciting update, but honestly, I'd be perfectly okay with only posting ones like these from now on.
~ Dad
Posted by Andrew Butters No comments:
Email ThisBlogThis!Share to TwitterShare to FacebookShare to Pinterest 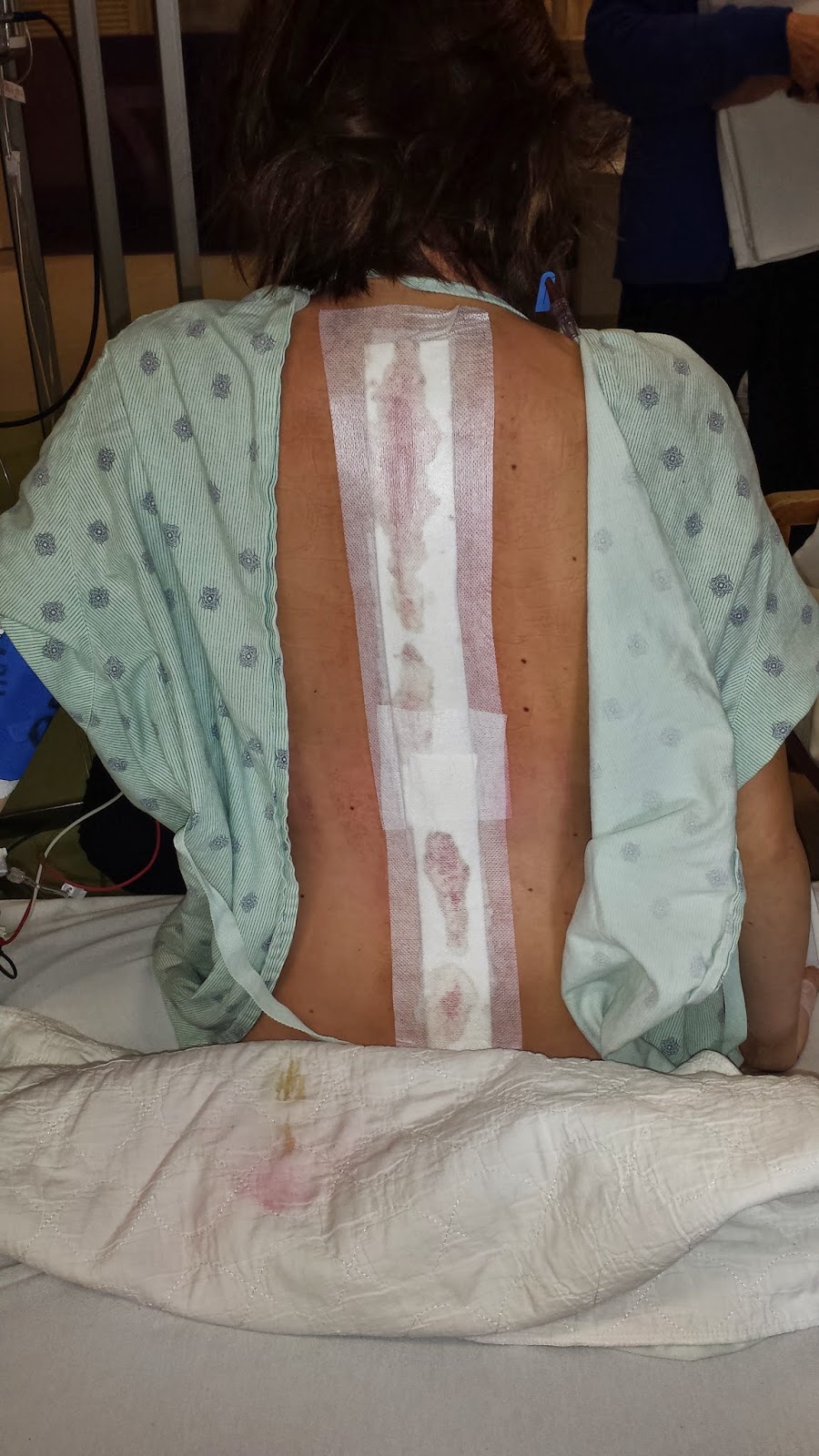 Oh, Avery's question for today was how much do the rods weigh? Surgical resident figured less than a pound.